The completed control panel with the underside showing: 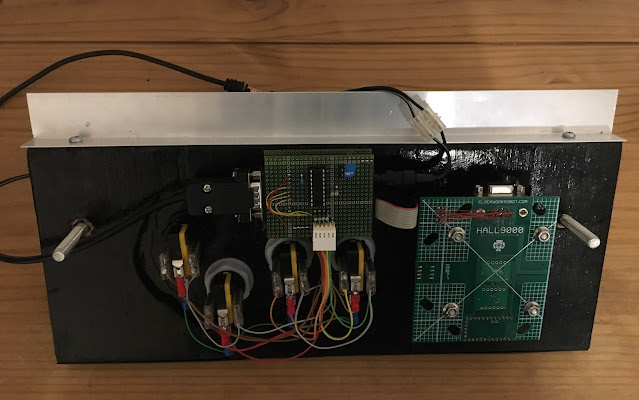 The control panel in action:

The creation of Frankenstein 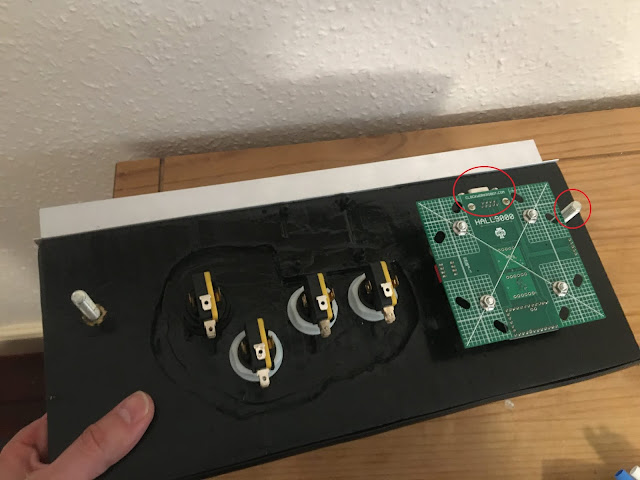 Not a problem. James Watt designer of the Hall board told me that the hashed area can be drilled in and cut off without risking damage to the PCB circuitry. Of course, cutting off one side of the Hall board which I have done according to the red straight line shown below does mean I lose the button connector. 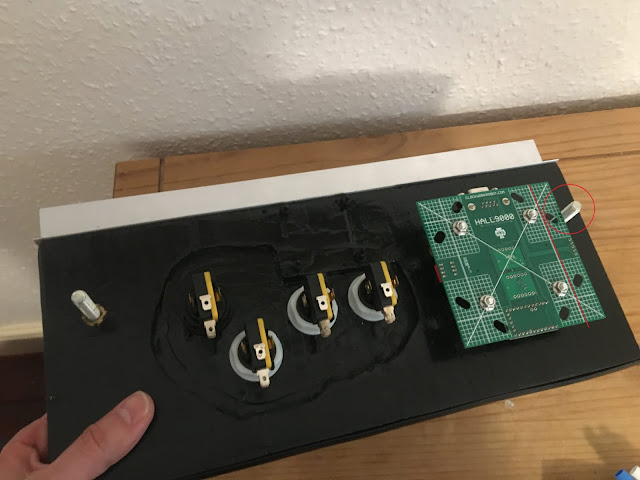 What I've done is add a dual in-line 10-way ribbon cable connector and soldered wires to the d-pin connector pads on the Hall board. 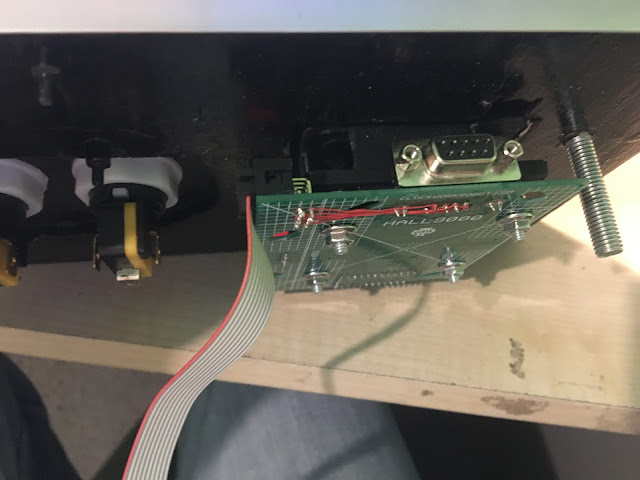 Control Panel Enhancements (It's light, Jim, but not as we know it)

So, right from the beginning, I chose backlit arcade buttons. These buttons split into two parts. There's the part that comprises a LED and the actual switch. This inserts into the arcade button housing. These buttons have built-in LEDs. In the olden days, such buttons with flashing lights existed but would have used small filament bulbs.

This is an initial photo with all LEDs powered continuously. 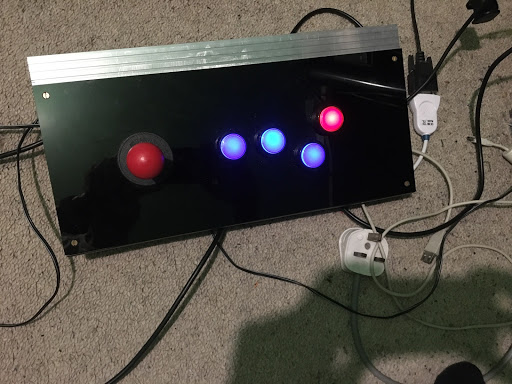 But I don't just want them to be contiunuously on. I want them to serve a better purpose which would have worked in a Video arcade hall of the '80s. That is, the buttons would light in particular patterns to attract a passerby to press a button and insert some coins. So the idea is of a sequence of flashing buttons in a "player attract" mode. This is not an original thought. Walk into any casino or sea-side arcade today and you'll see all manner of gambling machines with lights flashing in various patterns and accompanied with weird electronic sounds just enticing you to part with your money.

The VecCab control panel is thus getting a bit more complex now. In addition to Clockworkrobot's Hall board that converts a digital joystick into an analogue one, I'm adding another circuit that will give some intelligence to the control panel.

The intelligence is provided by a simple microcontroller. I've chosen a PICAXE18M2 device.These are really simple devices that you can program in a variant of BASIC. Once the program is compiled, it gets tokenised into code that can be downloaded into the microcontroller via a serial interface. I bought a couple of these at a couple of GBP each as I was really curious to see how easy they are  to use.

The idea will be to program it so the fire button (button 4) flashes and after a short while all the buttons flash. As soon as a button is pressed, the PICAXE will know a player is present. The button will then continuously light, or momentarily switch off (haven't decided yet) upon each press. If there is no player interaction with the game via the buttons, after a few minutes, the PICAXE will return to the "player attract" sequence of button flashing. So in action, if you are hitting buttons during game play the "player attract" mode is not visible. When the player walks away, the flashing button sequence starts again.

Next step is build the circuit and program....

The analogue part of the control panel works! (Part 4)

The picture captures it all....

For those who have stuck with me from the beginning of this blog journey (and boy it's been many years!), you will be familiar with the control panel  I've been building  for the Vec-Cab project. The setup was originally using an unmodified Sanwa digital joystick. 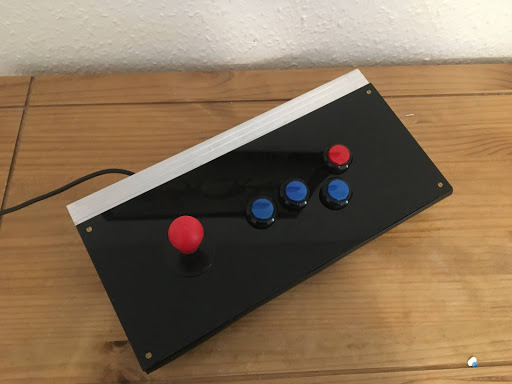 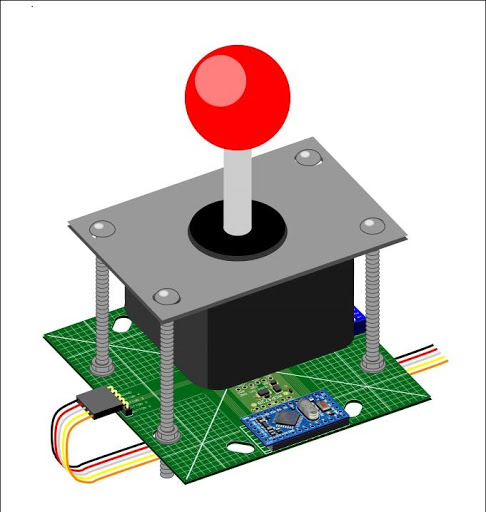 I previously  mentioned that the board has plenty of holes in it to support fixing to various joystick configurations. Different joysticks have holes in different places, but through standardisations of Sanwa joystick clones, at least one set of pre-drilled holes should match the location of the joystick holes.

However, there's one specific problem in my use case scenario. That is although I can thread the bolts through the top surface plate of the joystick, it is not then possible to place the black perspex layer directly on top because, the bolt heads stand proud out of the top plate surface.

Therefore, I needed a joystick with holes underneath to which I can thread through the bolts.

The first thing was to remove the existing  restrictor plate and the four micro leaf switches. The leaf micro switches don't have to come out but removing them avoids the clicking sound heard in such digital joysticks. The switches slide out  by wiggling in an upward manner. As soon as any gap between the leaf switch and base appears, gently inserting a  flat blade screwdriver and levering underneath helps with their removal. 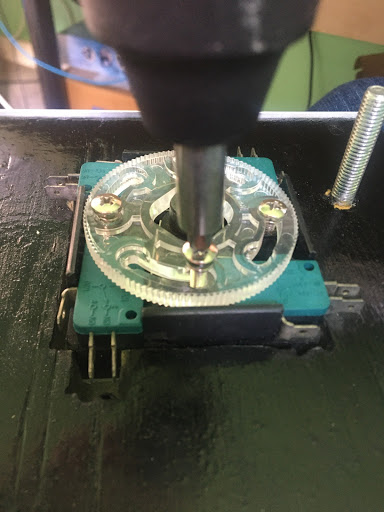 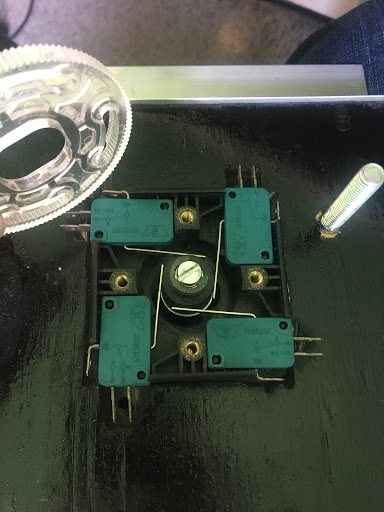 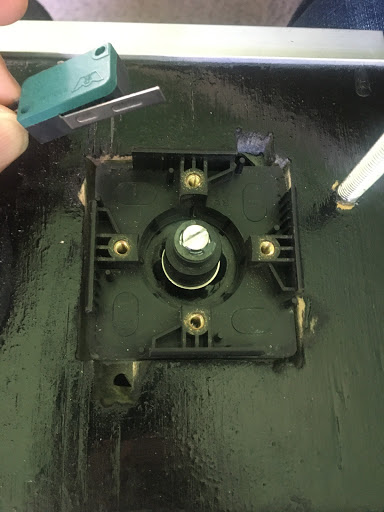 Next, I wanted to add a new plate that would fit onto the remaining joystick mount. I got a spare plate from an old (non Sanwa) joy stick I had lying around. I drilled four new holes in the plate so that they would align with the mount holes previously used for securing the restrictor plate. I also placed and secured four bolts into the corner holes. These bolts will feed into four matching located and freshly drilled holes in the ClockworkRobot Hall board. The top nuts are used to ensure that the Hall sensor on the PCB is spaced not more than 4 mm distance from the magnet. 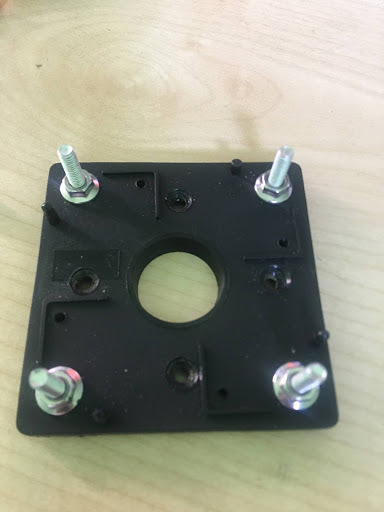 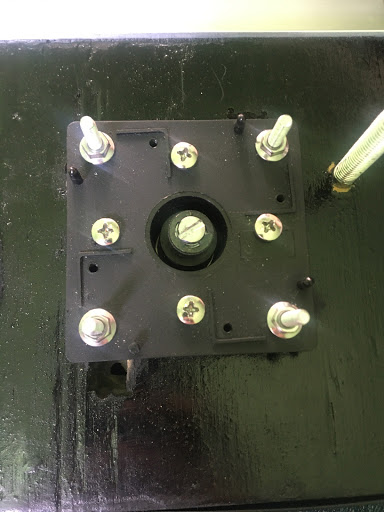 I cut off one of the plastic prongs protruding from the plate as when the Hall board was placed on top, the prong was interfering with the micro-controller on the Hall board. 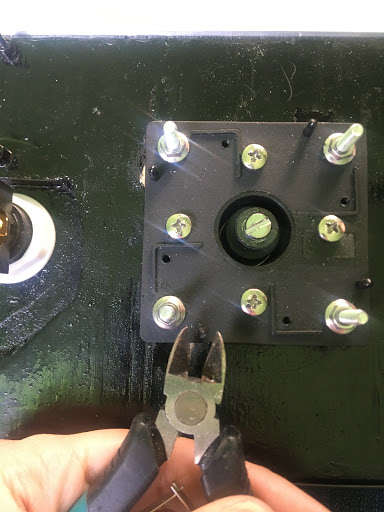 I took the smallest of the two magnets supplied in the Hall board kit and attached to the bottom of the joystick shaft. 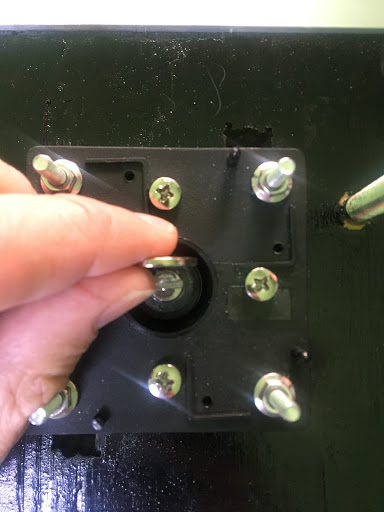 !!! WARNING !!! TAKE CARE WHEN HANDLING THE MAGNETS. DONT BRING THE TWO TOGETHER AS THEY ARE VERY STRONG AND COULD TRAP YOUR SKIN IN-BETWEEN!
For testing purposes and if you are gentle in your game play, just using magnet power to secure the magnet to the shaft is enough. However, to make a permanent mechanical connection you should dab some Araldite glue between the magnet and the shaft. 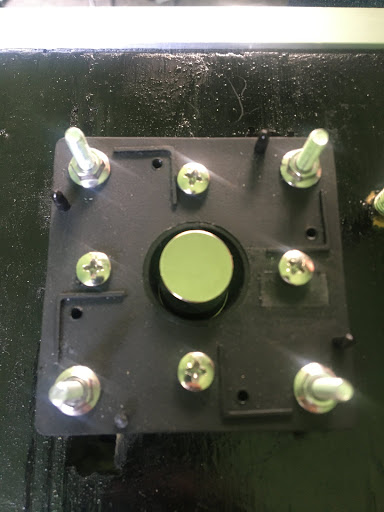 Drill four new holes into the Hall board. The holes must align with the location of the bolts located at each corner of the joystick plate. If you make the holes bigger than the M4 bolt diameter it gives you the ability to twist the Hall board if necessary to ensure the Hall sensor is well aligned with the centre of the magnet. 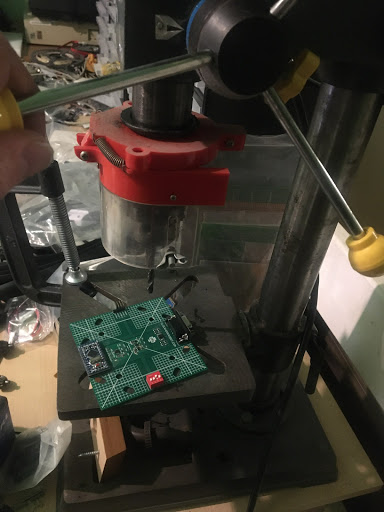 You can actually drill anywhere in the hashed area without fear of destroying any conducting layers (see my new holes made in the inside drawn square below). 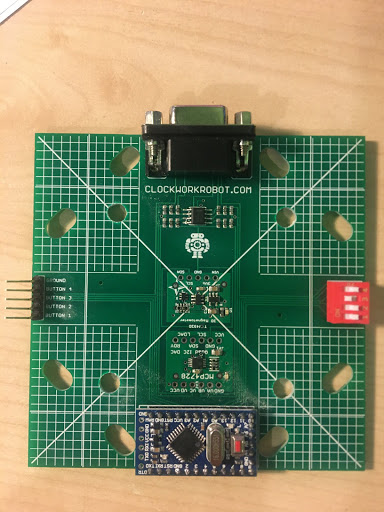 Finally, drop the Hall board over the bolts and screw on the nuts to secure. Make sure the PCB components are on the underside. 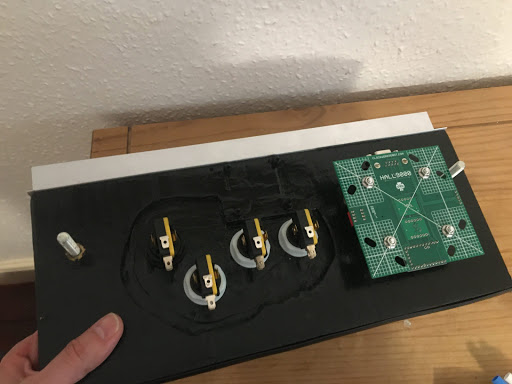 So, in a nutshell, with this converter kit, take a digital arcade joystick, attach the magnet to the joystick shaft, take the provided bolts, thread though existing holes on the joystick, attach nuts to secure bolts to joystick, attach more nuts to suspend the board (shown below) at a specific height over the center of the shaft (with PCB component side facing upwards), arrange for the Hall sensor on the PCB to be within 4 mm of the magnet, add a cable to connect board into player port, and you have analogue joystick control! 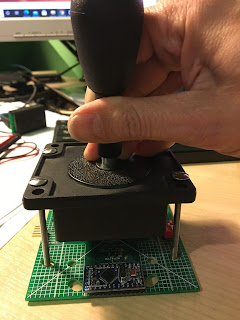 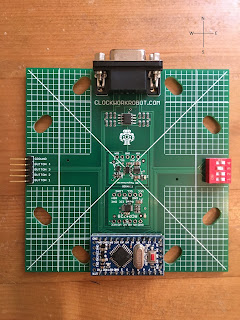 The above is just an example with a pretty non-descript joystick I found lying around. I'll go into more detail in  a later post regarding the specific joystick to be used in my VecCab.

I just received a Hall board from James Watt aka ClockworkRobot. What is this? I hear you say. This is a fantastic new product by James  to covert a digital arcade joystick (Sanwa or clone) into an analogue stick. Since starting my VecCab build I’ve been on a quest to find an affordable analogue arcade joystick that can be used in my setup.

You may ask why being able to play Vectrex games with an analogue joystick is useful when so many games on the Vectrex are configured for digital anyway. Well, this is a valid point, but on the VecCab I am building I want the feel of analogue. I don’t want to hear the click of the switches that you would hear with say a Sanwa digital joystick. In addition, with the Vector Mame Arcade emulators available on the VecFever, the majority are configurable for use with an analogue joystick.

Until now the possible analogue joy stick solutions have been very far and few between. I’ve been eyeing up original and OEM arcade analogue sticks in the past but have been put off from hitting the purchase button because prices were in excess of £200! In an other approach I’ve bought a couple of cheap analogue joysticks intended  for some of the 80’s computers with a view to mechanically  and electronically modifying (changing the potentiometers resistance  to the same variable resistance as the Vectrex ones). However, these sticks  have been sitting in a box waiting for that day when I can  drum up enough power to overcome my natural procrastination and dedicate  time to make a full investigation.

Imagine my joy when I saw James’ idea in the Facebook Vectrex Fan’s unite forum and later demonstrated on YouTube. Like all good ideas, the simplicity of the idea, makes it an immediate winner. It also shortcuts my previous deliberations and investigations into a working solution for an analogue joystick.

The idea is to put a magnet on the end of the  existing shaft of the digital joystick and use a Hall effect sensor placed under the shaft  to sense  the position of the magnet on the joystick shaft with respect  to the Hall sensor. When the stick is moved, the magnet moves relative to the static position of the Hall sensor. This then gets converted into a voltage signal that the Vectrex can understand.

James’ Hall solution  is a populated PCB (microprocessor onboard) supplied with ancillaries (bolts, nuts and Neodymium magnets) that can easily attach to the underside of a standard Sanwa digital joystick. 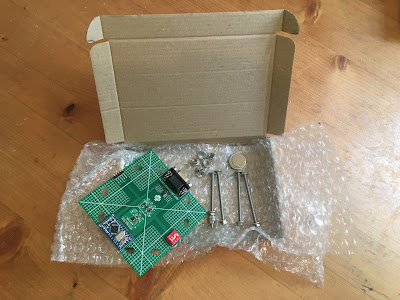 The Hall board digital to analogue arcade stick converter kit as received from ClockworkRobot.com